Home > Kids Recipes > Cook Out! Cooking Outdoors Beyond the Barbecue 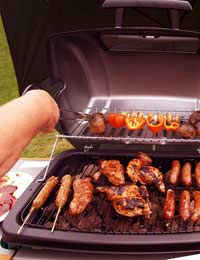 Kids will benefit from learning a sense of safety when cooking well outdoors. Understanding fire precautions will benefit young people throughout their lives and stop them running risks of injury or damage when they eventually move into independent life.

When cooking on an open fire, teach your children how use oven gloves when handling hot objects and how to use a hook, fork or stick to lift the lid of a Dutch oven when its on the coals. Always have a fire blanket handy when cooking outside and teach children how to clear the area of the barbecue or fire of any flammable materials, to check for overhanging branches and to wear sensible clothing.

A Dutch oven is what we in the UK tend to call a metal casserole dish – it’s thick-walled and often made of cast iron and it needs to have a tight-fitting lid. They are an ideal instrument for cooking on an open fire outdoors, or even on a barbecue or gas grill.

Nothing could be simpler, or tastier, than this recipe. It’s ideal if you’ve camped out overnight, even if just in your back garden. Cookable on an open fire, a barbecue or just on top a disposable barbecue, it’s a great way to start the day

Make bread and butter, taking the butter right to the edges of the bread, and then cut off the crusts. Put the buttered bread, butter side down, into the casserole, making sure you cover the whole of the bottom and the sides and pressing it well into the inside of the dish so that the edges of the bread slices seal together.Beat two eggs without milk but with seasoning and pour over the bread. Top with sliced frankfurters, sliced ham or some bacon and top with a little grated cheese. Put the lid on the casserole and put on the coals to cook for ten to fifteen minutes. When cooked the ‘pizza’ should lift straight out of the casserole and be easy to slice.

For this dish you need a lidded twelve inch casserole or Dutch oven. Serves 4.

Grease the base of the casserole and put four of the sliced chicken breasts on the base. Put half the pineapple on top of the chicken, pouring the juice over the top and then half the barbecue sauce. Layer the rest of the chicken on top, the remainder of the pineapple and then the rest of the sauce. Put the lid on the casserole and place it on the heat for forty to fifty minutes, checking with a meat thermometer that the chicken is properly cooked before serving.

Beef Tortilla Lunch in a Pan

This serves four to six, depending on appetites.

Before leaving home, mix the beef, olive oil, garlic, seasoning and spices, pour into a box or bag and refrigerate. Core and de-seed the peppers before slicing into strips and put in a Ziploc bag along with the sliced onion.

When you arrive at your campsite, create a hot fire and put the beef mix in a frying pan to cook. While you’re stirring it, pour the pepper/onion mix into tinfoil, fold it up to make a parcel and lay it on the hot coals to cook.

When the beef is cooked and the onion has become translucent, put the two ingredients, along with a dollop of sour cream and some cheese, in a tortilla and fold up.

For this you just need chocolate chip cookies, marshmallows and tinfoil. It’s the perfect pudding to cook while you are finishing off your savoury as it requires a fire that has almost burnt out.

When the fire is low, put a marshmallow between two chocolate chip cookies, wrap the whole bundle in tin foil and put on the ashes of the fire. After about four minutes, lift off the coals with a pair of tongs and unwrap. The marshmallow will have become a sticky, sugary treat. Allow to cool before eating as the marshmallow holds its high temperature for a long time.