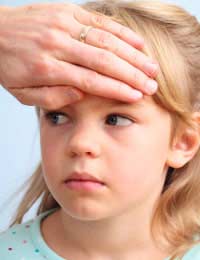 It’s bad enough having a child that is ill or recovering from injury, but if they also lose their appetite you can begin to feel that they are slowing their return to health by not eating enough or not eating properly, and that adds to the emotional roller-coaster your family is on.

Those who are liable to coughs, colds and viral infections need a generally healthy diet that avoids junk food and focuses on natural produce. There are foods that boost the immune system such as onions and garlic. Also good for those who fall sick easily are brightly-coloured vegetables, trying to get as much of a ‘rainbow’ into the diet as possible on a daily basis really improves resistance to disease.

The old wives’ tale that chicken soup cures colds has some evidence in truth as chicken, particularly the bones, has some special immune-boosting micronutrients. Both before and during any viral illness, a daily dose of vitamin C helps to avoid infection and to speed recovery once ill, so citrus juices or berries should be offered several times a day.

It can be difficult to persuade ill children to eat, so avoid presenting them with big meals and offer food more frequently but in smaller quantities. Finding novel ways to present food can get tired and irritable young people much more interested in eating. For example, offering a ‘picnic’ on a little blanket with a hamper packed with finger foods can be an enticement to munch away, or make up a tasty stir fry and serve it in a take-away bag with a little ‘gift’ hidden in the bottom of the bag to encourage consumption.

Remember that sore throats can be painful, so pureeing fruits and vegetables, making ice-lollies with fruit puree and milk, and serving mild-flavoured soups and smoothies can all help give your child good nutrition in easy to eat forms.

If your child is feverish, they may not tolerate milk well, but if they can, then offering warm milky drinks and milk-based treats like rice pudding and baked custard can offer lots of protein and calories that rebuild the health of sick children. A spoonful of honey in the middle of a bowl of yoghurt or rice pudding is useful, as honey is a popular folk remedy for the symptoms of colds, flu and sore throats.

Fluids are vital for children with upset stomachs or those who have been vomiting. Many children suffer extra pain and discomfort during illness because they are not adequately hydrated, and headaches, feverishness, stomach cramps and confusion can all be a result of dehydration. Traditionally, sick children were denied drinks to help the stomach settle, but this advice is outdated. Now it’s considered vital to keep your child hydrated and there are several ways of doing this:

Just as you child may revert to books and toys from a younger age when ill, so they may find it attractive to revert to earlier eating patterns too.

It’s important to offer carbohydrates that have a low GI because they release their energy slowly, stabilising blood sugar and preventing rises and falls that can cause nausea and lethargy as well as making the mood peak and trough. Omega-6 fatty acids can be found in nuts and seeds, and Omega-3 in oily fish, both of them are valuable in improving mood in addition to their vital role in physical health. Putting low GI together with essential nutrients and the reversion to ‘baby’ behaviour could mean making rolled up sandwiches with peanut butter and mashed tinned tuna that can be eaten with the fingers, or making bite-sized fish-cakes that are sandwiched in a small wholemeal scone made with chopped nuts and seeds.

For dinner, make small toast ‘animals’ using cookie cutters and spread them with nut butters, before arranging them in a ‘jungle’ of sliced finger vegetables. Avoiding the need to wield knife and fork can reduce mealtime stress on ill children too.

How to Cater for Children With Childhood Diabetes