Safety Equipment for the Kitchen 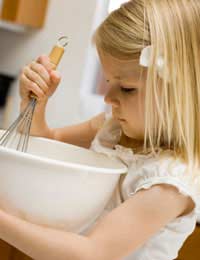 Ask a fireman! He’ll tell you: the kitchen is the most dangerous room in the house.

Over 20 people are killed or injured in kitchen fires every day. Chip pan fires are the most common cause of fire-related injuries in the home but fires can also be caused by unsafe electrical appliances or the build-up of fat and food crumbs on a grill.The best safety equipment is you! Being there, being aware!

But there is some equipment you might want to consider for added safety:

A fire blanket is made of fire-resistant material and by covering the pan – or wrapping it around a person whose clothes are on fire – it cuts off the supply of oxygen without which the fire cannot flourish.

There are different sorts of fire extinguishers on the market for different sorts of fires – depending on what’s burning. None of them are suitable for a chip pan fire but you may like to keep a small extinguisher in your kitchen or home for other instances. You can get advice from your local fire brigade on what extinguisher would best suit your purposes and you need to know how to use it. It’s a bit late to try to read the instructions when you’ve dropped a lit match on your favourite rug!

A domestic-size extinguisher complying with BS EN3:1996 will cost you between £20 and £40.

Smoke alarms (British Standard 5446 Part 1) are essential for every home and can be bought for about £5. An average family home needs at least two alarms: one for upstairs and one for down. In spite of the fact that most fires start in the kitchen, the kitchen is not the best place to position it. Too much smoke and steam comes out of even the best-run kitchen! The ideal place is on the ceiling near the middle of the hall or adjoining room.

If you already have smoke alarms, do you test them regularly? Lots of us have probably forgotten we even have them, so much so that there’s a government campaign, ‘Push the button not your luck’, to encourage us to ensure that our smoke alarms are in working order. These are the regular checks we should be doing:

If you get an intermittent bleeping from your alarm, don’t just take out the battery! It means the battery is low on power and needs changing.

If your smoke alarm keeps going off when there isn’t a fire, don’t just take out the battery! Try moving it further away from the kitchen, or vacuuming inside.

Dealing With a Kitchen Fire

Now let’s imagine the worst scenario: a fire has started. The advice from the authorities is to ‘Get out, stay out, and call out the Fire Brigade’.

If it’s a small fire that has only just started in your pan, and you can do this safely, then put a fire blanket over it, and leave it to cool without attempting to move it. Turn off the heat only if you can reach the switch safely. If you don’t have a fire blanket, hold a tea-towel under running water, wring it out and put it over the pan. But only attempt to put out the fire if it’s in its very early stages.

If you do a lot of deep-fat frying then an electric thermostatically-controlled fryer would be a good investment.

Now, if you’ve followed all the advice in Kitchen safety for kids, you and your children should emerge unharmed from your cooking session, but just in case, it’s a good idea to keep a first aid kit in the kitchen as well. Simple kits containing the basic necessities can be bought from most large chemists or you can make up your own, including some of these: