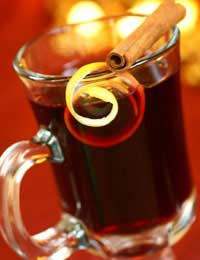 Children are fascinated by the past, and encouraging them to cook dishes with a link to history is a great way to expand their knowledge and to get them to try new foods that they might not otherwise be willing to sample.

Wassail is an Old English word which means ‘good health’ and it’s become the term for an ancient tradition of making and sharing a drink with neighbours. While many wassails are heavily alcoholic and drunk around Christmas and New Year, there were also alcohol free wassails and this recipe is one that children can easily make with a little adult assistance. It’s a fun activity for a winter party and this recipe serves 20-25

Heat the oven to 350°F or 175 Celsius.Put the studded orange on an ovenproof plate and bake it for 30 minutes before taking it from the oven, using heatproof gloves and piercing it several times with a skewer.Now put the orange and the rest of the ingredients in a large saucepan and cover. Bring to a boil and then simmer for a further 30 minutes before pouring carefully into a heat-proof serving bowl or a crock-pot or slow cooker. Leave the orange and cinnamon sticks to float on the surface.

As the wassail is served you can sing the wassail song. Traditionally, the wassail was served in one huge pot or leather beaker and passed from hand to hand while the song was sung, but it can also be sung as the wassail is ladled out into cups or glasses. A small portion of the wassail is supposed to be poured out onto the ground as a reward to the gods of the harvest, especially the tree gods who produced fruit in orchards.

Victorian children were exposed to a wide range of foods from across the Empire and their diet was nowhere near as stodgy as we have been led to believe. One really popular treat was mulligatawny – served sometimes as a sauce in the Victorian era but now always as a soup. The word mulligatawny is a corruption of two Tamil words molegoo (pepper) and tunes (water). This soup would have been served as a complete meal with some bread. Children would have eaten it in the nursery or after going out for bracing walks in cold weather. It serves around eight people.

In a large heavy-bottomed saucepan, fry the chicken in the butter and then remove the chicken and keep warm while you fry the onion until soft and golden. Stir in the curry powder or paste, and garlic and cook until the flavour rises before adding the flour, stirring to mix well.

Continue to stir as you add the chicken stock a little at a time before returning the chicken pieces to the pan and then add the herbs and the spices tied into a little piece of muslin. The Victorians liked their food heavily flavoured so you can use a heavy hand with the herbs. Add the lemon zest, sugar and seasoning with salt and black pepper, and bring to the boil, stirring all the time before turning down the heat to a simmer and cooking for around 60 minutes until the soup has thickened a little, at which point you remove the spices and any large pieces of herb still showing. Check the seasoning levels, adding more salt, pepper and sugar to suit your taste and then put the lid on the pan and cook for a further 30 minutes.

Serve in large plates with a little cream poured in the centre, a sprinkle of either spring onions or coconut and sliced eggs to one side.